Welcome to the Secreti Haus Family

History of the Rottweiler

The majestic Rottweiler has an equally impressive history, according to common belief. Their ancestors date back to working dogs for the Roman Army. They served as drover dogs for the Legionnaire soldiers, herding and protecting the cattle that fed the men during long marches. Powerful, fearsome, but with a fine temperament, they proved to be excellent assets for Caesar’s Empire. One of the stops during these military treks was the German town of Rottweil. Some of these powerful dogs ended up staying in the town, and were bred with the local canines. Eventually these animals were used to pull heavy merchant loads, and were also employed as protection and herding dogs. The fantastic dogs became commonly known in the vicinity as “butcher’s dogs”. Just as they had loyally served the Roman soldiers, these Rottweilers were fine working dogs for the Germans.

Eventually the rise of railroad shipping and commerce caused the Rottweilers to lose their jobs and perceived usefulness. The Rottweiler’s pulling and carrying power was not as desired as it had originally been. Specimens of the breed became very few and far between, but German breeders with a fondness for the dog kept them from the brink of extinction. In the early 20th century, Rottweilers made a remarkable comeback, as they became coveted as police and protection dogs. The dog’s purpose and many uses were once again appreciated, from protection usage to a loving family pet. Their strength, loyalty, and intelligence could not be denied.

In the 1930’s the Rottweiler breed was accepted into the American Kennel Club, and has been beloved ever since. Today, Rottweilers are revered as superb working, family, and show dogs. Along with its loyalty and willingness to learn, the breed often tends to be dominant. Therefore a Rottweiler owner should implement a skilled training regimen with their dog, while themselves displaying strength, a strong will, and patience. A Rottweiler deeply needs to respect you as much as love you. 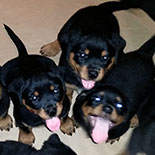 To achieve the goal of a balanced dog, Secreti Haus has developed a diversified puppy program that works in sync with the natural pack curriculum, while at the same time introduces independence, environmental desensitizing, socialization, and confidence building. 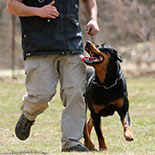 At Secreti Haus we give pups plenty of affection, but we also teach them work ethic and respect. The young dog must not get anything for free, and we strive to teach these values at a young age. 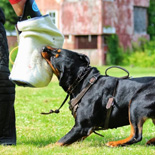 See Our Dogs in Action

We believe that genetics plays a major role when it comes to the quality and temperament of a dog. However diet, socialization, and training are additional key factors that complete the overall perfection of the dog.